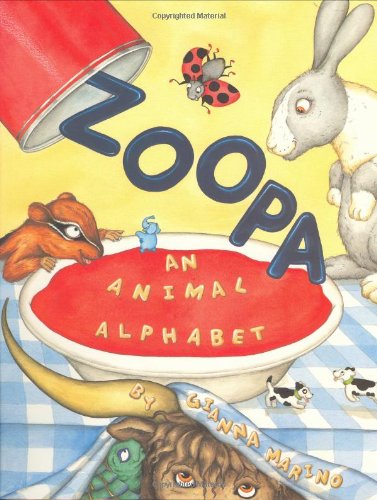 Marino, an illustrator and toy designer, opens her wordless debut work with a seemingly pedestrian bowl of soup poised on a blue-checkered tablecloth. But as noodle letters begin to emerge from the broth, they magically draw out a corresponding animal or insect (some aquatic critters, such as 's jellyfish, prefer to dive right in). The pages reflect a wide range of probability. An ant and butterfly, for and , respectively, don't seem like a stretch, but for other letters, a parade of puppies emerges from the place mat, a ring of tiny elephants from the rim of the bowl itself. By the time the 26th letter is ready to be introduced, the table has erupted into a visually comic cacophony, egged on by Marino's gleeful disregard for realistic scale. A zebra ties up the loose end by performing a cannonball into the middle of the meal. The animal portraits are not entirely accomplished or consistent; some feel wooden and underrealized, while others verge on coy cartoons. But Marino's concept is well orchestrated, and her decision to eschew any text should encourage youngsters to spend extra time on each spread, searching for ways in which the animals cavort around the bowl—the monkey and chipmunk seem to particularly enjoy making mischief with the other letter representatives. Alphabet soup will never look the same. Ages 3-6.