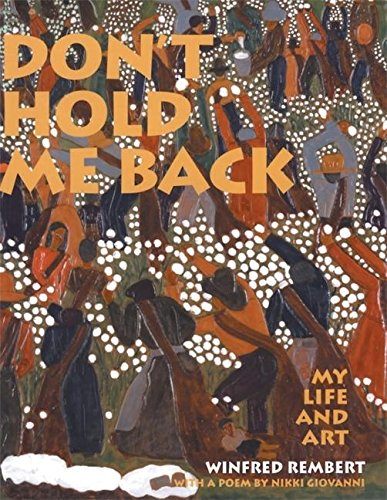 DON'T HOLD ME BACK: My Life and Art

This inspirational autobiographical portrait opens with a brief, resonant poem by Nikki Giovanni, paying tribute to the optimism and resolve of Rembert, an African-American who grew up in racist rural Georgia in the 1950s. A self-taught artist, Rembert creates hand-tooled paintings on leather, examples of which serve as compelling illustrations of life events. The text, which is based on Charles and Rosalie Baker's interviews with Rembert, serves almost as extended captions to his art. His narrative style is fresh and colloquial, e.g., of working long days in the cotton fields, he writes that he labored " 'from can't to can't'—you go when you can't see and you come back when you can't see." Some recollections are upbeat: making toys from empty syrup cans or whitewall tires, dancing the Slop at Bubba Duke and Feet's café. Yet he also portrays such grim episodes as the ritual burials of lynching victims and being jailed during a civil rights demonstration, which led to working on a chain gang. An encounter with a fellow inmate, a leather worker, inspired Rembert's experiments with this art form, which later evolved into rich, effectively naïve, earth-toned paintings. Several of the paintings recall the work of Jacob Lawrence in their perspective, composition and largely geometric representations in solid colors or repeated patterns. Rembert's generous spirit flows freely from both his words and pictures, which work together to show the audience the difference between what a man's life might be and what he can make of it. Ages 10-14.