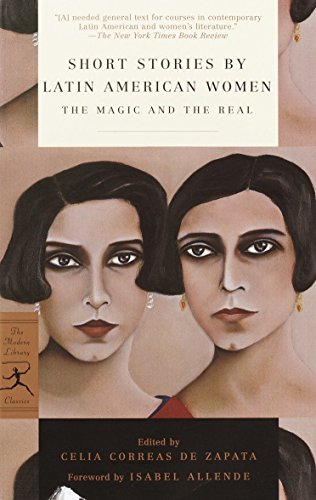 SHORT STORIES BY LATIN AMERICAN WOMEN: The Magic and the Real

"Until very recently," novelist Allende writes in the foreword to this comprehensive collection, "Latin American literature was—with very few exceptions—a man's game." No more. Combining prominent names such as Luisa Valenzuela, Elena Poniatowska and Allende with others little known outside their home countries, this anthology shows off the wealth of fiction being written today by Latin American women. Editor Correas de Zapata, a San Jose State University professor of Hispanic literature, has chosen stories from around the continent and the Spanish-speaking Caribbean. Brazilian author Clarice Lispector's "Looking for Some Dignity" is a bracing tale of an elderly women's creeping senility and waning sense of self. A number of stories, such as "Sophie and the Angel," by Cuba's Dora Alonso, about an old widow visited by an angel playing an electric guitar, show that Latin American men don't hold the patent on magic realism. Others, such as "Cloud Cover Caribbean," by Ana Lydia Vega of Puerto Rico, are firmly in the realist tradition; in this case, a refugee boat heading toward Miami founders because of the mutual mistrust of the passengers. If there's a flaw, it's that the sheer number of authors—31 in all—coupled with the brevity of each selection make it difficult for individual voices to stand out. The editor clearly favors breadth over depth, showcasing as many writers as possible in this appealing smorgasbord.