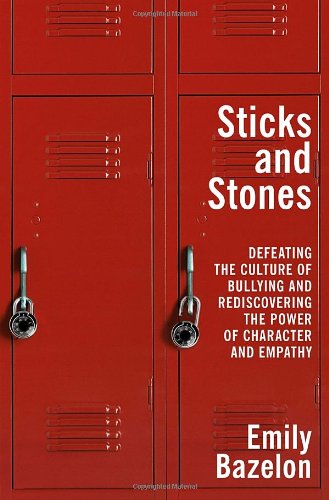 Sticks and Stones: Defeating the Culture of Bullying and Rediscovering the Power of Character and Empathy

Law journalist, senior editor at Slate (where much of this book’s content appeared), and New York Times contributor Emily Bazelon is a voice of authority on bullying. An antidote to the media frenzy surrounding this now heated issue, Bazelon’s even-handed, thorough, and affecting narrative provides insights and information about the kids, parents, educators, and courts dealing with the actions and aftermath of psychological and physical bullying in schools, as well as insidious cyberbullying. No longer just the province of mean girls and bad boys, bullying, and its attendant “drama,” is an epidemic affecting every community and is rife with a pervasive deniability on the part of instigators, accusers, and adults who are called upon to referee. Bazelon guides readers through three different scenarios, each focusing on a victim or perpetrator of bullying. These include Monique, a middle-school girl, who is targeted by her peers and finds support and friendship outside of school, thanks to family and community sports programs; Jacob, whose “in-your face” gay identity makes him a repeat target and whose parents instigate a lawsuit against the school district for violation of his civil rights; and Flannery, who, with her classmates, bullies fragile, depressive Phoebe, possibly contributing to her suicide and resulting in a wrongful death investigation and trial that draws international attention. Bazelon’s investigative abilities take her into the center of each case—and further: she visits Facebook headquarters to report on its antibullying protocol; she goes to schools where students combat bullying and principals create and adhere to successful, reward-based, zero-tolerance bullying prevention programs; and she calls for blame-free cooperation between parents and schools. While less prescriptive than other books on the topic, very useful FAQs are included, as are resource lists for readers. Masterfully written, Bazelon’s book will increase understanding, awareness, and action. Agent: Elyse Cheney, Elyse Cheney Literary Associates. (Feb.)
close
Details