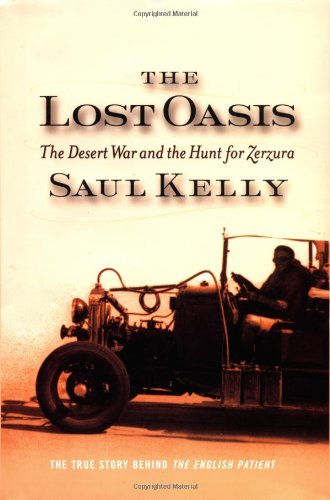 THE LOST OASIS: The Desert War and the Hunt for Zerzura: The True Story Behind The English Patient

Finally, a reliable popular account of –era North African desert exploration, here from Kelly () who covers various expeditions, spies and war from 1920 to 1943 with accuracy and flair. The legendary oasis of Zerzura, and the lost ancient army of King Cambyses were huge draws for pre-WWII European expeditions to the area. British explorer Ralph Bagnold cuts a dashing figure, and there's much material on Hungarian desert explorer Lazlo Almasy, so rippingly played by Ralph Fiennes. Neither Zerzura nor Cambyses's army were found, although much evidence of prehistoric man in the area was discovered during these rival expeditions. Once the war began, the experience of seasoned explorers was utilized by both the British and Germans. Almasy worked for the Germans carrying out long-range intelligence missions behind enemy lines, by vehicle and aircraft: transporting espionage agents, carrying out acts of sabotage and tracking enemy movements. Firsthand accounts from a variety of sources are nicely blended into the narrative, which keeps the tension steady, but the book is heavy on operational mechanics. For those looking for romance, the novel and movie remain the better choices.