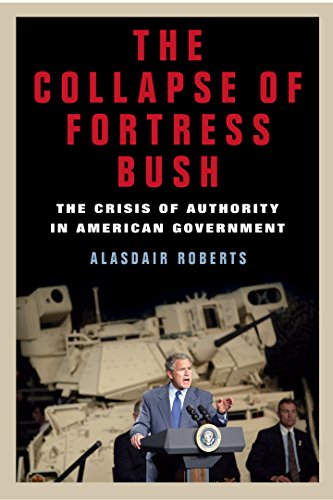 The Collapse of Fortress Bush: The Crisis of Authority in American Government

In the years following the September 11 attacks, supporters and critics of the Bush administration have debated its broad expansion of executive authority. Syracuse professor Roberts breaks decisively from these assertions, instead arguing that the Bush administration has repeatedly failed to consolidate presidential authority. Where critics decry recent infringements on civil liberties, the author counters that, in comparison to previous historical crises, legal and social protections have limited the scope of these infringements. Similarly, the realities of geo-politics have constrained espoused changes in foreign policy typified by the Bush Doctrine advocating preemptive action against threats to American interests. The author insists that the institutional design of the federal government and political shifts of the 1960s and 1970s have made the consolidation of executive power extremely difficult. This provocative, intelligent book will likely challenge the opinions of Bush's champions and detractors alike. With his simple but compelling central argument that “personnel may change, but the broad constraints on federal action do not shift so readily,” Roberts suggests that institutional forces have shaped American politics more profoundly than the personalities and aspirations of those in power.