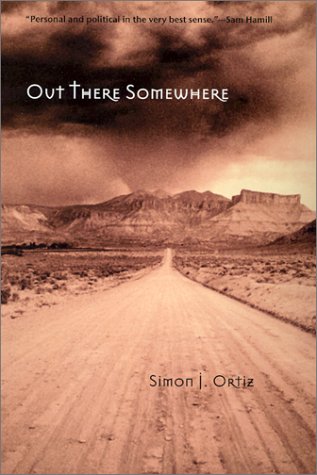 Combining Native American history, personal confession and social critique in a clear, conversational style, Ortiz tends to avoid metaphor and elaborate language or fixed poetic structures. The first of five sections centers on time spent in diverse institutions: the academy, writers' colonies, various academic conferences, jail and detox centers. In "Headlands Journal," an essay that mixes poetry and prose, Ortiz begins with a meditation on Native populations in prison, moves to tell a story about three visiting Chinese artists and then by the end of the essay addresses his anger when someone calls the Acoma Pueblo language "foreign." The series "What Indians?," written for the Venice Biennale, addresses with humor and anger the control that the dominant culture has over Native American self-representation: "Real or unreal./ Real and/ or unreal./ They were made up./ It didn't matter." Those who turn to Ortiz's work for its mixture of insightful, no-nonsense political analysis and poetry rooted in Acoma culture will be more interested in the last three sections of the book. There are numerous poems about the importance of the land and of the continuing struggle to regain the land, such as "Telling and Showing Her" and "Acoma Poems," printed in both the Acoma Pueblo language and English. If, as in poems like "Beauty All Around: A Moment on the Lakota Prairie," Ortiz moves too easily from the sunset ("beauty all around me") to a series of questions about cultural appropriation, this book still asks crucial questions as much as it argues for beauty.