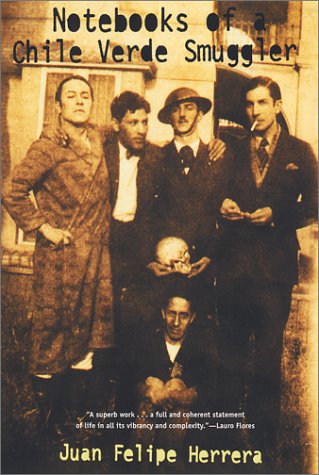 NOTEBOOKS OF A CHILE VERDE SMUGGLER

HSplicing names, dates and places with a talismanic array of bilingual references, Herrera uses the rough, unfinished notebook form—more or less invented by Aimé Césaire in —to turn his speaker's search for the truth into a force for unsettling existing political and poetic paradigms: "I stand alone on my boulevard, with my small audience of category makers, not word tuners or word flutterers or word hissers or word twisters, I said category makers. I am the idea, I am the concept, I am the liquid syrup that messes with the machine's objectives." By detailing his literary, familial (illustrated with a selection of family photographs) and activist histories, Herrera skillfully confounds preconceptions and prejudices, laying nonviolent dynamite under the tracks of those who would box him in: "We invented Chicano Studies, con manas limpias en las mañanas, demanding our rights (this sounds old now but we did demand our rights). With our language, our home-poems, our long walks and fasts for justice—Delano, Sacra, Coachella. I can say this." Composed of equal parts generational requiem, personal reckoning and political manifesto, these notebooks are deliberately process-oriented and lack the polish of "finished" work, since they are built to deliver a hot green flavor, "let's call it a flavor; it set out on its own." Readers should dig in.