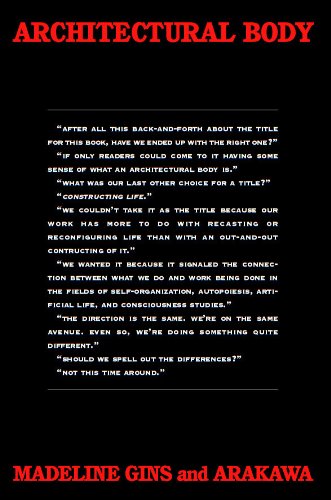 Arakawa/Gins—as they are known in the visual arts world—have never been easy to categorize, as their oeuvre includes experimental poetry (Gins's ), phenomenological mind-busters (the seminal conceptual book/installation ), dense meditations on proprioceptive being (), and their most sustained project, the architectural investigations called , which branched off into major shows at the Guggenheim, a few huge coffee-table books and an actual Reversible Destiny city now in construction in Japan. is one of their more approachable, but no less playful, distillations of the concepts. It envisions an individual obtaining control over the very forward movement of one's body through time by permitting architecture to expand the parameters of one's sensorium, even to cling to it—so that, literally, one wears one's house like a coat: "ROBERT: But if I'm to be a tent pole or a caryatid, how can I also sit in a chair? ARAKAWA: If we initiate the form, other spines within the surrounding material will kick in and take over... for ten minutes at a time." That this book appears in a series devoted to "poetics" is just: Gins and Arakawa argue for a new language for architecture—even new words, such as "coordinology" and "bioscleave" (for biosphere)—that is as strange and determined as William Blake's, and as icily postmodern (because they appear to be ) as Baudrillard, Hakim Bey or the writers associated with Autonomedia. rings as a revolutionary call to personal agency that recalls the heady first years of Surrealism, but with a language that also fits such recent phenomena as the Burning Man festival, though this books feels bigger.