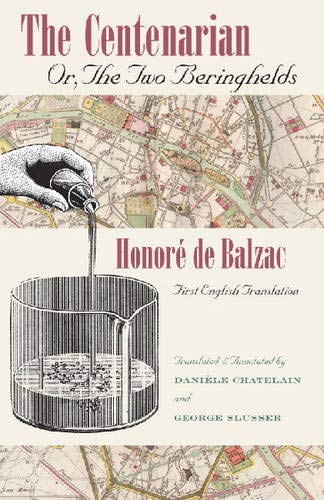 The Centenarian or, The Two Beringhelds

This excellent, scholarly edition provides the first English translation of an obscure, early Balzac work (1822). A mix of gothic elements, romance and SF, this disjointed novel is a mishmash of stories set in different time frames, loosely linked by the two characters of the title—the Centenarian father and his illegitimate son Tullius, or General Beringheld. The monstrous, immortal father—who sustains his powers by extracting the life-essence from young people—is the novel's central figure, but Tullius's diaries form the main story. Born centuries after his father was born, Tullius, who later grows up to become a much-decorated general in Napoleon's army, searches for the Centenarian, a quest punctuated with love stories, including that of Tullius and the innocent Marianine. This improbable tale reveals a writer seeking a voice and will appeal to scholarly readers interested in the early history of science fiction and its origins in 19th-century French popular literature.