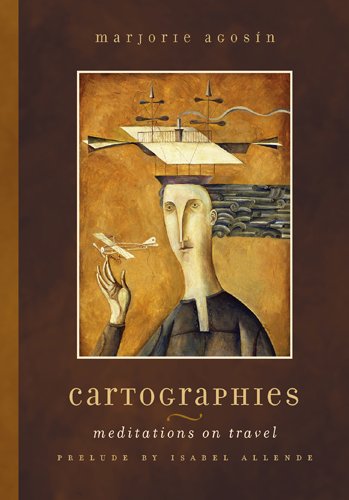 With lyrical prose and deep passion, writer and poet Agosín ( ; ; etc.) maps out her past and the places that have given her life meaning. Written as a series of what Allende calls "prose poems," the book's short chapters are dreamy, meandering reflections on Agosín's travels through locations rich with personal meaning and sometimes claiming violent histories. Agosín was born in Chile, after her family fled Jewish persecution in Europe. When Pinochet seized power during Agosín's childhood, the family fled again. The author shows how she's embraced her wandering ways and grounded herself in foreign places, including Vienna, Prague, Sarajevo, Cairo, Tuscany, Ireland, Tijuana and, improbably, York, Maine. Her descriptions of these places are short, often dramatic, and vary from concrete to conceptual. Returning to Chile as an adult, she writes, "I wanted to dream about my country, draw near her as if for the first time, with the innocence of the little girl who asks where they put the dead people. My country was a sharp desert where women rested upon a silenced history and eight hundred active volcanoes." The author describes each location's history and meaning for her life, but she also includes a powerful sense of the present. Of course, in covering so many settings, Agosín doesn't address any in much depth. Rather, she intends each chapter to feel like a first impression, and an intimate one at that. Although the Holocaust looms large, Agosín's palpable love of humanity and unique prose style keep this work uplifting.