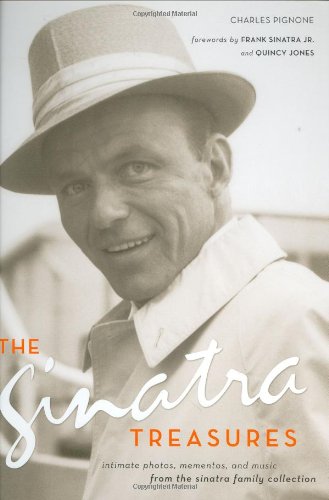 THE SINATRA TREASURES: Intimate Photos, Mementos, and Music from the Sinatra Family Collection

This marvelous paean to the chairman of the board comes from the person who is perhaps the ultimate source of Sinatra information—Pignone, archivist for the Sinatra family and the president of the Sinatra Society of America fan club, working in collaboration with the Sinatra family. Those seeking scandal and intrigue should look elsewhere, for this volume has been lovingly put together, like a family album. The 204 black-and-white and color photos (some familiar, most not) tell the story of Sinatra as friends, relatives, and fellow musicians and singers—from his children to professionals such as Sammy Kahn and Billy May—offer their memories. But what stands out are the many realistic and beautifully reproduced memorabilia tucked into sleeves throughout: e.g., a 1944 radio program script between Sinatra (known then as "The Voice") and comedian Bert Wheeler; a 1942 New York Giants baseball scorecard advertising a Sinatra performance with the Tommy Dorsey Orchestra; telegrams and letters; the piano score to "My Way" (a song, Pignone explains, Sinatra disliked for its "self-indulgent, self-reverential lyrics"). Pignone also allows readers to see what Sinatra himself had to say on any given subject, with ample quotes throughout. Rounding out this extraordinarily rich and entertaining volume is a CD containing early live recordings, some songs (e.g., from the Frank Sinatra show in 1945) and talk, including a 1981 WNEW interview with Arlene Francis.