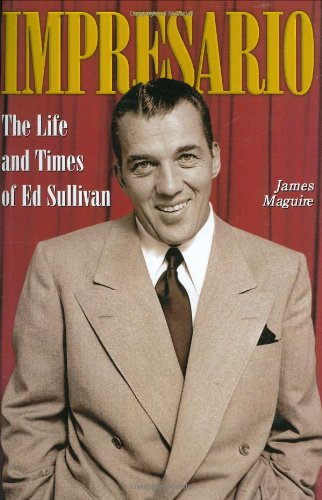 Impresario: The Life and Times of Ed Sullivan

Running from 1948 to 1971, the 's "Big Tent" theory defined family viewing. Each Sunday night, more than 35 million people tuned in to see everyone from Elvis to Richard Pryor, the Beatles to Nureyev. Animal acts and high art shared billing. A gig on made many performers. Maguire, who is also publishing an account of the National Spelling Bee this season ( ), reveals the man behind the curtain, portraying Sullivan (1901–1974) as tyrannical, egotistical and controlling. As Maguire tells it, the sportswriter turned columnist had one goal: fame. Sullivan failed at radio and film, but triumphed in print, and though his early TV years were rocky, he successfully (and lucratively) captured the zeitgeist; his tastes were America's tastes. As an emcee, he was awkward and stilted in front of the camera; as a producer, he was brilliant and intuitive. "[W]ithout being able to sing, tell jokes or be charming," he became famous. Yet the successful star was a loner. He adored his wife, but had no close friends or real home life. Maguire has written a fascinating biography and meticulously recorded the birth of TV, the heyday of newspaper columnists and the glamour of New York. 40 b&w illus.