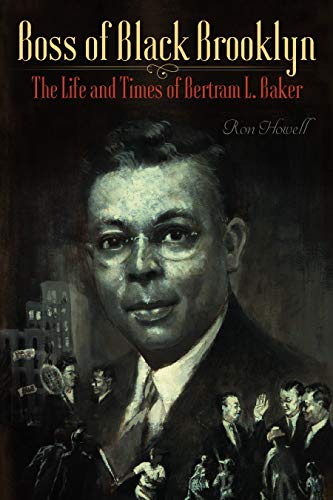 Boss of Black Brooklyn: The Life and Times of Bertram L. Baker

In this valuable addition to New York history, Howell, a former reporter for the Baltimore Sun, writes about his grandfather Bertram L. Baker (1898–1985), the first black person elected (in 1948) to represent Brooklyn in the New York state legislature. The author writes that, although most of the book “reads as a biography, it is also a memoir-inspired story” that chronicles Baker’s 1917 journey from the Caribbean birthplace he shared with Alexander Hamilton to Brooklyn’s West Indian enclave in Bedford-Stuyvesant, where he rose from bookkeeper to politician in the borough’s rough-and-tumble Italian-, Jewish-, and Irish-dominated Democratic machine. The author paints a complex portrait of a young, ambitious immigrant, influenced by Booker T. Washington’s political moderation, who worked to pass antidiscrimination laws, including the 1955 Metcalf-Baker Act, which made housing discrimination illegal. By the time Baker retired in 1970, he had served as assembly majority whip, been a key member of the American Tennis Association (which was instrumental in black tennis legend Althea Gibson’s career), and paved the way for future African-American politicians, including New York City mayor David Dinkins and representatives Charles Rangel and Shirley Chisholm. Howell also discusses Baker’s flaws, including his “brusqueness and overbearing sense of superiority” and his open extramarital affair. This shines a necessary light on an all-but-forgotten black politician from the pre–civil rights era. (Oct.)
close
Details