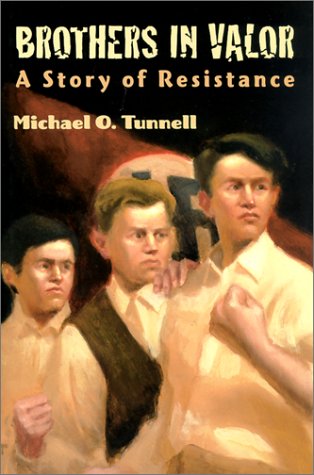 BROTHERS IN VALOR: A Story of Resistance

This fictionalized account of German resistance to Hitler holds more merit for its subject matter than for its delivery. The narrator, Rudi Ollenik, 11 when the novel opens in 1937, is a Mormon, like his best friends, Helmuth Hübener and Karl Schneider. Although church teachings contradict Nazi ideology, their branch leader, President Zander, runs their Hamburg community "as if God, church, and Hitler were all in league." The boys join Hitler youth groups so as not to make trouble for their parents, but they loathe the Nazis. After the war begins, Helmuth decides to fight back. He gets an illegal short-wave radio in order to listen to the BBC; writes up the British news, thus pointing up the lies of German media; and, with Rudi and Karl's help, distributes his handbills through mail slots and in telephone booths. In 1942 the three, along with a fourth accomplice, are caught, tortured and tried; Helmuth is executed while the other boys are sentenced to prison terms. As Tunnell () explains in an endnote, the handbills described here are translations of the actual reports circulated by the real-life Helmuth Hübener and his friends, a fact certain to impress readers. The author convincingly demonstrates the pervasiveness of Nazi propaganda. The research, however, feels stitched together and the characters are underdeveloped, with the result that suspense never builds; readers may stick with the story for its intrinsic interest, but its grip is unlikely to be visceral. Ages 10-up.