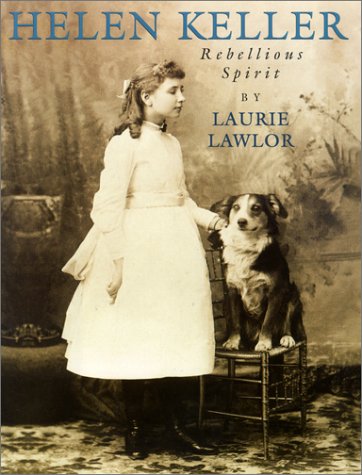 Lawlor's () use of liberal quotes from Keller's own writing and objective analysis of both Keller and her teacher, Anne Sullivan, offer insight into her subject's character and experience. This well-researched biography places Keller squarely in the context of her time. As the subtitle proclaims, Lawlor paints a positive portrait of Keller but also unveils her radical political beliefs and persistent rebellious streak. Beginning with Keller's birth in Tuscumbia, Ala., in 1880 and the illness that caused her to lose her sight and hearing at 19 months, the author sets the stage for the bright, frustrated child who "became almost intolerably spoiled and bossy." Lawlor includes famous episodes (such as Keller's epiphany when Sullivan helps her to connect the word "water" with the liquid from the well) but also delves into more complex issues, such as Keller's interdependent relationship with Sullivan (after her arrival at the Kellers' in 1886) and Keller's constant battle with finances. But throughout the volume, the author captures Keller's zeal, whether bravely venturing into the ocean or "even at eighty… [continuing] to do her best to topple her saintly image." (Keller quipped to Patty Duke, the child actress who was portraying her on Broadway, that her greatest joy—after walks in the garden—was her martini). Photographs and prints effectively join the narrative in vivifying this determined and inspiring woman. Ages 10-up.