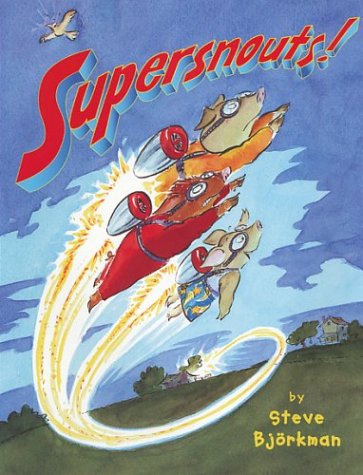 Late one night, a young pig named Hamlet notices two masked men within the farmhouse perimeter. He alerts his older barnyard friends, Snoutbuster and Kernel Hog. "Break out the gear. Code 'Curly Tail.' Let's move!" they grunt, sounding like official pigs on a mission. As they step into tight jumpsuits, each emblazoned with an "S" inside a hog's-head silhouette, Hamlet realizes their identities: "You're the Superhero Pig Patrol, Hooves of Steel, and Snoutmasters of Glory!" he cries. "Yes, Hamlet, the stories are all true," mutters Kernel Hog. Hamlet, ripe for adventure, dons a "rocket pack," a pair of goggles and a star-studded pair of boxer shorts. The three flash into action, with the untried Hamlet flying clumsy loop-de-loops; when the robbers capture Kernel Hog and make off with a big TV, Hamlet foils the crime by crashing into them. "The old hams... were in hog heaven as they hoofed it back to the yard," writes Björkman ( ). Like Betsy Lewin, who pictures knowing animals and obtuse humans in books like , Björkman depicts his fearless swine in fluid swoops of black ink and jazzy watercolor. As the absurd action stretches over too many pages (it takes four spreads for the rocket-propelled pigs to zoom from wallow to house), it becomes clear that the author is more interested in porky puns than plot. Nevertheless, gruff voice-bubble asides like "Put a truffle in it" should keep readers amused. Ages 4-8.