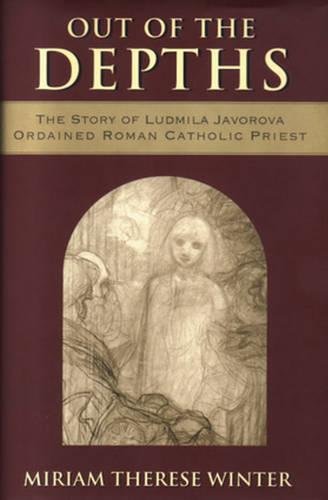 OUT OF THE DEPTHS: The Story of Ludmila Javorova, Roman Catholic Priest

"If we wait for a man to approve this, it will never happen, so we must go ahead without it." Felix Davidek spoke these urgent words in 1970 before secretly ordaining Ludmila Javorova, his trusted aide and a woman, as a Roman Catholic priest in Czechoslovakia's underground church. Winter, a Medical Mission Sister in the United States, tells Javorova's full story for the first time in this compelling chronicle of the Koinotes, the fellowship that Davidek, in partnership with Javorova, formed in the 1960s while Czechoslovakia was under harsh Communist rule. Winter's account of Koinotes is disjointed and clumsy in places, but its essential facts are so intriguing as to cover even a multitude of literary sins. Though told in Javorova's voice, the story reaches beyond her extraordinary ordination to embrace the man who made it possible: Davidek, the passion-filled priest who was consecrated a bishop in the underground church in 1967. Davidek died in 1988, before the fall of Communism in 1989 and before his protégée's clandestine ordination became widely known. Although she is barred by the Vatican from functioning as a priest, Javorova has emerged as a heroine of the women's ordination movement, particularly in the American Catholic Church. Proponents of the cause will applaud her courage, and even opponents will find it difficult to not be impressed with her spirituality and humility.