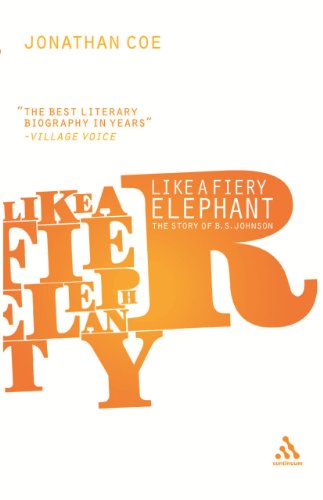 LIKE A FIERY ELEPHANT: The Story of B.S. Johnson

In this quirky biography, British novelist Coe ( , etc.) tackles the gloomy life of his one-time literary hero, the British working-class experimental writer B.S. Johnson, who published seven novels during the 1960s and '70s before taking his own life in 1973, aged 40. Drawing on the testimony of Johnson's surviving wife, former girlfriends, friends and colleagues, Coe traces his melancholic subject's wartime childhood, undergraduate days at London University and determined efforts to launch himself as a writer. With at times overindulgent empathy, Coe charts Johnson's professional frustrations, uncovering a singular style of exasperation in Johnson's bemoaning of British literary traditionalism and stubborn defenses of his commitment to avant-garde formalism (his novels feature black pages, holes cut into pages, and unbound pages to be read in random order). Coe also traces the genesis of some of Johnson's bizarre superstitions, such as his narcissistic identification with Christopher Marlowe. Avoiding psychobabble, Coe discerns pathological tendencies in Johnson's deep attachment to his beautiful mother and in the peculiarly intense lifelong grudge he bore a college girlfriend who jilted him. Reproducing generous extracts from Johnson's novels and more autobiographical poems, Coe perhaps hopes to attract new readers to Johnson's work; as many readers will be repelled as will be intrigued.