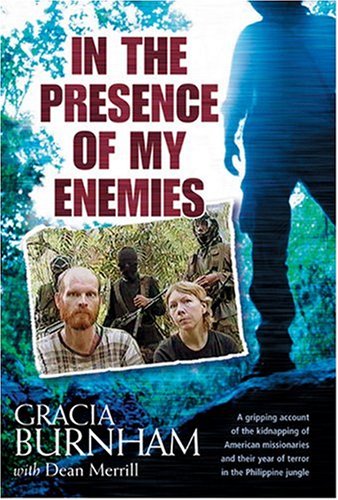 IN THE PRESENCE OF MY ENEMIES

In this remarkably honest and unaffected memoir, Burnham tells the story of her captivity at the hands of Abu Sayyaf, a Muslim extremist group in the Philippines. For just over a year, she and her husband Martin, a missionary pilot, lived with their captors and a variety of other hostages in the Philippine jungle. In a botched rescue attempt, the Philippine army shot and killed Martin Burnham and Ediborah Yap, a nurse who was the other remaining hostage. Gracia Burnham was also shot, but rescued and treated for a leg wound. Burnham hauntingly depicts the alchemical reaction of deep Christian faith, Stockholm Syndrome and the unremitting terror of hostage life. The odd intimacy among the hostages and captors comes across in surprisingly frank conversations. At one point, Martin boldly refers to all the bad things the captors have done to the hostages, only to have one of them look at him quizzically and claim he has never done any harm to the hostages. The captors, in fact, do unspeakable things, such as beheading hostages or taking them as unwilling "wives." Impressively, Burnham makes no attempt to dramatize these events for shock value, nor does she use this book as an occasion for Christian triumphalism. Instead, she chronicles both her high and low moments as a Christian during that year, and shows tremendous respect and love for members of other faiths with whom she lived. While some of the book is written for a Christian audience, a much wider audience will appreciate Burnham's brave, artless account of these horrific events.