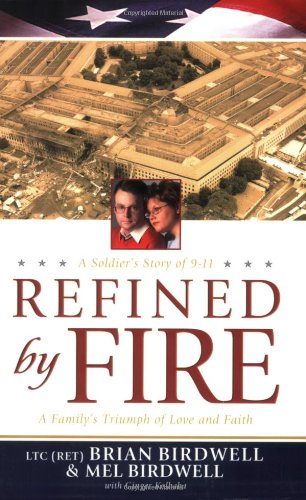 REFINED BY FIRE: A Soldier's Story of 9-11, A Family's Triumph of Love and Faith

Using vivid first-person narration, the Birdwells describe how Brian suffered second- and third-degree burns over 60% of his body when terrorists crashed a jet into the Pentagon on September 11, 2001, and how the family's Christian faith brought it through Brian's recovery. Birdwell spent three months in the hospital, enduring more than 30 surgeries, daily debridement (removal of unhealthy tissue) and physical therapy. The account alternates between the perspectives of husband and wife, and also incorporates the experiences of their son, Matt. The technique works well throughout; it is most gripping when Brian faces death alone in a flaming hallway and when Mel scrambles through gridlocked traffic to get to the hospital. Details set this book apart. The Birdwells relate Brian's horrific injuries and treatments in a way that might turn some stomachs (skin coming off with his wedding ring, a staph infection that covered his body with green pus). They also expose their own shortcomings: Mel feels guilty about leaving her son and berates some hospital staffers, while Brian expresses anger toward the terrorists. Such confessions lend credence to the Birdwells' belief that only a sovereign God could bring them through their ordeal. This memoir's striking descriptions of the Birdwells' pain, failures and faith against the backdrop of 9-11 will fascinate many readers