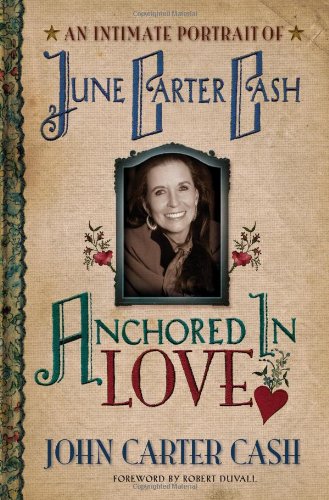 Anchored in Love: The Life and Legacy of June Carter Cash

he only son of country legends Johnny Cash and June Carter Cash pens a heartfelt narrative of his mother's life that nicely combines biography, autobiography and inspirational guidebook into a fitting tribute to a woman whose life and career embodied modern country music. Musician and producer Cash spends the first half of his book reviewing his mom's early days performing with the legendary Carter Family in 1939, and her later marriage to Johnny Cash. This story has been notably told before in June's two autobiographies and Mark Zwonitzer's definitive , which Cash dutifully cites, while adding some fascinating stories, such as a possible more-than-flirtation with the young Elvis Presley and various aspects of Johnny and June's courtship that he feels “the film lacked.” But the book really begins to soar in its second half. Cash unflinchingly details the addictions that beset himself and many of his sisters—as well as June and Johnny's addictions late in their lives—while lovingly showing how throughout this time, and until her death in 2003, June's “unshakable” religious faith infused her life and helped inspire her children to continue the legacy of “her family's music and its strong work ethic.”