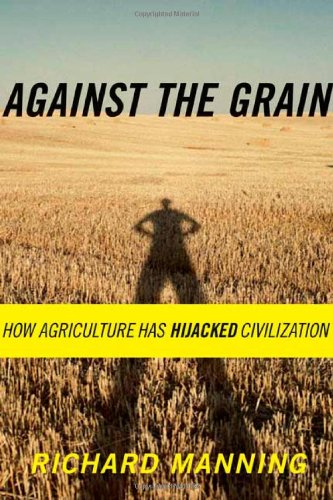 AGAINST THE GRAIN: How Agriculture Has Hijacked Civilization

In this controversial and prodigiously researched condemnation of our current and past systems of growing grain, Manning ( ) argues that the major forces that have shaped the world—disease, imperialism, colonialism, slavery, trade, wealth—are all a part of the culture of agriculture. He traces the beginnings of agriculture to the Middle East, where plants were abundant and easily domesticated in coastal areas; hunter-gathers, who became fishermen, formed settlements near river mouths. Manning skillfully details the historical spread of agriculture through the conquest of indigenous peoples and describes how this expansion led to overpopulation, famine and disease in Europe, Asia and Africa. Sugar agriculture was supported by slaves and farming by laborers who grew produce for the rich while the workers ate a high carbohydrate diet (potatoes, rice, sugar, bread) and ingested no protein. In the U.S., modern agriculture has evolved into an industrial system where agribusiness is subsidized to grow commodities like wheat, corn and rice, not to feed people but to store and trade. According to Manning, agricultural research focuses on just these few crops and is profit driven. Although he succeeds in drawing attention to critical problems caused by agriculture, such as water pollution and malnutrition, he is pessimistic about reform coming from political systems. He romantically advocates hunting animals for food and hopes that such citizen movements like urban green markets and organic farms can lead to better nutrition.