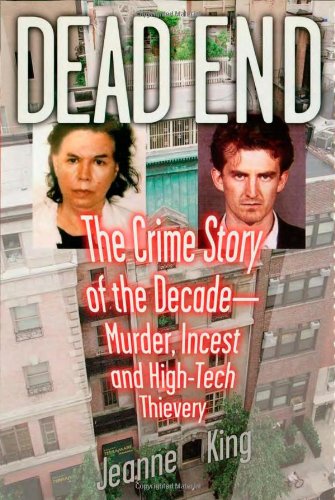 DEAD END: The Crime Story of the Decade: Murder, Incest and High-Tech Thievery

Though the sordid handiwork of mother-and-son grifter team Sante and Kenneth Kimes has gotten its share of ink—Alice McQuillan's appeared before the trial; Gary Indiana's new novel, (Forecasts, Nov. 19), was inspired by their crimes; and an account by Sante's other son, Kent Walker, is still in hardcover—veteran Reuters journalist King, who has covered the duo's escapades since their arrest in 1998, chimes in with a sensationalist account of her own. Focusing on their trial for the murder of wealthy Manhattanite Irene Silverman, whose Upper East Side mansion they were trying to steal, King leapfrogs among exposition and biographical sketches, glitzy locales and courtrooms, exhaustively detailing the Kimeses' crimes (lying, passing bad checks, forgery, murder, fraud). Given the dynamics here—the cons and petty thefts, the deeply pathological mother-son relationship, the intrigue over the Silverman murder—the Kimeses' story provides the groundwork for engaging reportage. But reading King's account is about as enjoyable as stumbling into a snuff film. Mother Kimes is portrayed as so singularly manipulative and controlling that it becomes difficult to imagine her capable of duping anyone, while Kenny becomes a sympathetic second fiddle, even though he's the trigger man. Rife with blunt sensationalism, rudimentary police procedural and unsupported claims (the accusation of incest, for example), the book is an ugly tale of common grifters with uncommon talent.