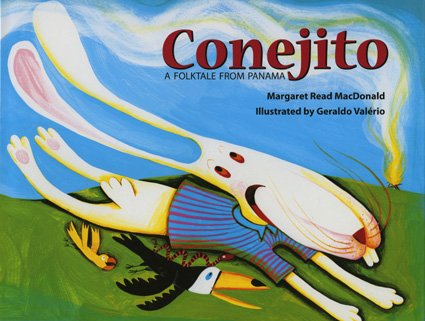 Conejito: A Folktale From Panama

The title hero (whose name means "Little Rabbit") is off to visit his aunt in the mountains. "I have a sweet old auntie,/ my Tía Mónica!" sings Conejito. "And when she goes out dancing... / they all say, 'Ooo la la!' " He encounters three predators but escapes by promising them he'll be tastier on the way back: "[Tía Mónica] is going to feed me cakes and cookies and every good thing/ until I am " But his aunt is clever, too, and after plumping up Conejito (with fruits and vegetables as well as sweets), she stuffs him into a barrel so he can roll past the danger and back to Mamá. MacDonald's ( ) text, with its giddy, kick-up-your-heels feel, presents a wealth of audience participation opportunities. She's chosen 13 expressive Spanish words and phrases to punctuate the story, and repeats them judiciously throughout. The text also boasts several refrains in addition to the Tía Mónica song (which can be sung using the melody on the final page). But Valério's ( ) pictures are not quite as successful. The book's elongated format seems ideal for the extended curvilinear lines he favors (the rabbits' ears often take up half the spreads), and the illustrations featuring the rabbit family take the best advantage of the layout. But the almost maniacal energy of the other scenes, coupled with a scattered compositional focus, often makes it difficult to know where to look first. Ages 4-8.