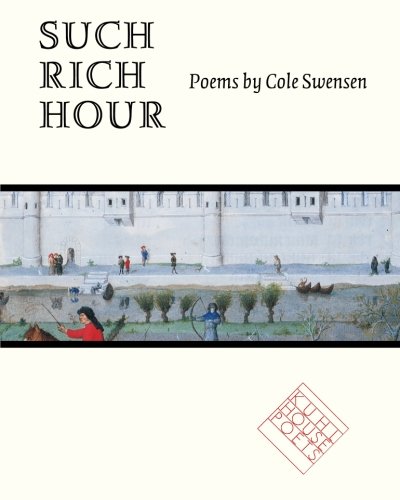 The latest from the prolific Swensen (; ; etc.) amounts to a very long, fragment-strewn, philosophically-minded sequence of short poems about landscape, architecture, time, visual art, gender and religious life in medieval France, based on the illuminated manuscript known in English as . Time stops, starts and repeats through scrambled, broken and repeated phrases: syntax breaks down and dissolves into single terms ("We one/ king and wielded, welded all our swan"), then regroups into neatly detachable sentences: "We'd wake up early and watch the sky rend." One set of verbs cascades to mimic a scythe; elsewhere, repetitions invoke church bells. Most poems are half a page long, and bear dates in their titles—"May 30, 1427: Joan-not-yet-saint-with-sheep." Meditating on clocks and calendars and saints' days, on space and history, and on the organization and disorganization of consciousness, Swensen's lines work as explorations, even guesses, adorned by nouns from "vellum" to "plague," that best find their sense when read cumulatively. Though Swensen succeeds in conveying her medieval enthusiasms, her verse evinces more contemporary presences: the collage techniques of Susan Howe and Charles Olson, and the cinematic, stuttering lines of Jorie Graham's more recent work, influence some part of almost every poem. Some readers will wonder when the store of historical materials on which to base one's contemporary, abstract reflections will finally run out, but others will find Swensen's familiar methods create a luxurious space of repose.