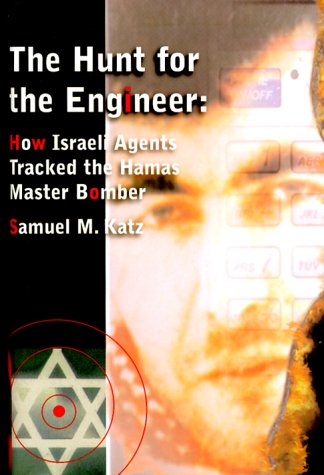 The Hunt for the Engineer: How Israeli Agents Tracked the Hamas Master Bomber

One of the bloodiest and most feared terrorists in the history of the Middle East, Yehiya Ayyash (""the Engineer"") got his start in electronic engineering, innocuously monkeying about with family radios and TV sets. Indeed, Ayyash's original goal was to be an honest engineer, but when Israeli bureaucracy denied his routine application to study in Jordan, he joined Hamas and dedicated himself to a life of terror that lasted from 1994 to 1996 and resulted in 150 Israelis dead and 500 wounded. Katz's gripping book tells the story of Ayyash's early failures and his later, horrible successes, which included the Division Street and Dizengoff Street bombings. Katz, an expert on terrorism and counterterrorism, has written several other books about Middle East commandos, and much of the book is concerned with the history of various Israeli security forces, especially Shin Beit, and their attempts to catch the elusive bomber. It is unclear just who his sources are--they are identified broadly as ""spies, soldiers, statesmen, and super-cops""--but the book, which details the histories of Islamic resistance groups as well, does not seem unfair. The concluding chapters, in which Katz pieces together the assassinations, within two months of each other, of Prime Minister Yitzhak Rabin and Ayyash (slain by an Israeli-engineered exploding cell phone), are particularly effective. The book's chilling epilogue, in which a new leader takes over Israel and new Palestinian bomb masters continue the killing, make it clear that the Middle East's troubles did not end with Ayyash's final phone call. (Dec.)
close
Details