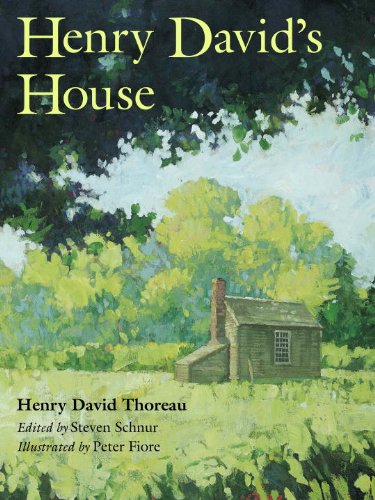 Schnur () deftly plucks Thoreau's own words from , and Fiore's () luminous watercolor and oil paintings affectingly evoke the simplicity and serenity of this man's existence on his beloved pond. As Thoreau chronicles a key chapter in his life—his 1845 construction of the one-room cabin that became his treasured abode—he repeatedly marvels at the sights and sounds of the natural world, constantly changing with each season. Schnur's chosen passages reveal Thoreau as a participant in rather than merely an observer of nature: "Sometimes a rambler in the wood was attracted by the sound of my axe, and we chatted pleasantly over the chips which I had made." Spare yet eloquent, Thoreau's words offer intriguing insight into his lifestyle as well as his philosophy. Describing the minimal contents of his house, he notes, "My furniture, part of which I made myself, consisted of a bed, a table, a desk, three chairs (one for solitude, two for friendship, three for society)." Fiore's striking panoramas underscore the beauty and the appeal of the locale that became Thoreau's home and inspiration, while the interiors and spot art emphasize the simplicity of his lifestyle. Ages 5-9. (.)