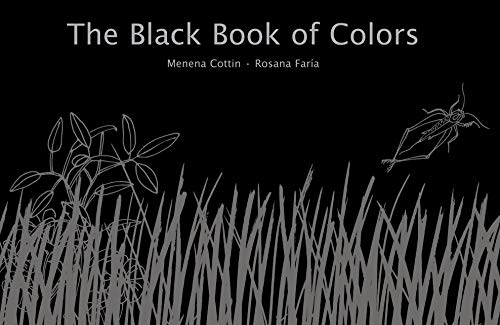 The Black Book of Colors

Attempting to convey the experience of blindness, this non–picture book by a pair of Venezuelan artists reads triumphantly. White text appears on black pages, with braille above; on the facing page, also black, images suggested in the text are printed in raised black lines—inviting the reader to discover them through touch alone. (Decoding the images this way, not incidentally, is difficult.) “Thomas,” the narrator begins, “says that yellow tastes like mustard, but is as soft as a baby chick’s feathers.” Opposite, delicately drawn plumes float across the page. While the concept is arresting in itself, Thomas’s proclamations about color reveal him as a bold, engaging character. Red is “sour”; brown “crunches”; and green “tastes like lemon ice cream.” He has given careful thought to all the colors, “but black is the king.... It is as soft as silk when his mother hugs him and her hair falls in his face.” It would be a mistake to read the book as a message about how the other senses compensate for blindness; “compensate” doesn’t do justice to all that Thomas offers about what he tastes and feels and hears and smells. Ages 5–10.