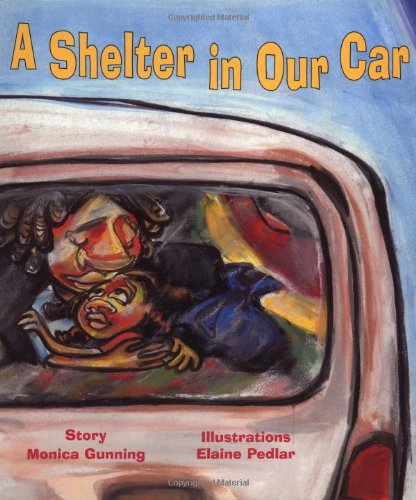 A SHELTER IN OUR CAR

The opening of Gunning's ( ) suspenseful picture book sets the stage for the imperiled existence of a girl and her mother who live in their car. Newcomer Pedlar uses the color red, emanating from a police car's lights, to flood the spread with the urgency of sirens blaring, as the mother attempts to shield her child; the mother's wide-eyed expression conveys her fear and concern for the child. A palpable affection between mother and daughter infuses the text and provides reassurance to readers as the characters face challenge after challenge. In the mornings, they use the rest room in a park before Zettie sets off to school and her mother goes in search of a job; at night, the woman reads a library book to Zettie in the back of their car. The girl's classmates call her "Junk Car Zettie," and as she attempts to flee the bullies she becomes separated from her mother. The reunion between mother and child makes clear their gratitude for each other, and the promise of a new job and a place to live ends the book on a hopeful note. Pedlar's use of somber colors and generous white space effectively depicts the girl's sense of isolation and sadness, but the stylized characterizations take on a cartoonish quality with their clashing colors and exaggerated, often distorted facial features. Unfortunately, children may wind up viewing homeless people as alien or strange beings unlike themselves. Ages 6-up.