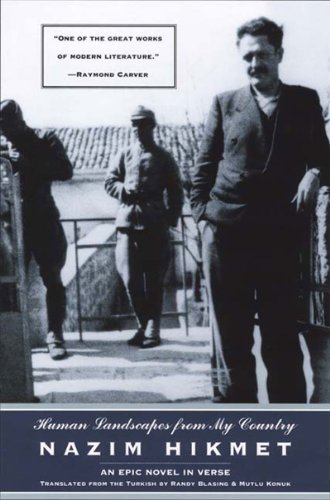 HUMAN LANDSCAPES FROM MY COUNTRY: An Epic Novel in Verse

A vital part of modern Turkish literature, Hikmet (1902–1963) was a poet whose lyrics, as sung by leftist performers such as Pete Seeger, had international resonance, and whose repeated imprisonments drew protests from the likes of Pablo Picasso and Jean-Paul Sartre. This novel in verse, written during one long prison sentence in the 1940s, reflects the emotional and physical torments the poet experienced. More gritty than lyrical, it is powerfully plainspoken: "But Selim was no Communist./ He didn't even know what communism was./ ...But the cops thought different./ They laid Selim on the floor. And when Selim got up,/ he couldn't step on his feet./ They laid Selim on the floor./ And when Selim got up,/ he couldn't see." A revised version of a 1983 abridged Persea edition, this volume disappoints in at least one respect: a facile preface by Edward Hirsch, who states that Hikmet's "voice is sad and reads like music; it is joyful and sounds like happiness." Hikmet's writing is poetry under siege, and the blunt heroism of his characters makes them more Marxist ideals than believable human beings. The poetic element may not survive well in translation, but the content and context make this a lastingly fascinating work. As translator Konuk writes, the book describes "people from different social backgrounds and classes, ranging from the dispossessed and the unemployed to senators and industrialists... from factory workers and peasants to doctors and professors' wives." This is recommended for all modern literature collections, as evidence of the indomitable human will toward free speech in spite of great suffering.