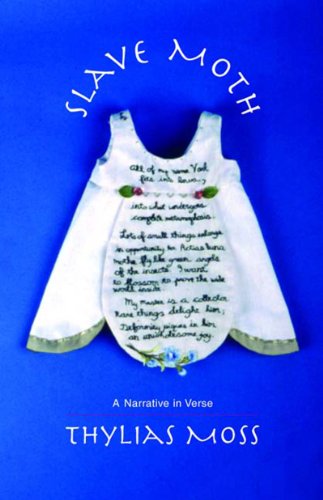 SLAVE MOTH: A Narrative in Verse

Moss's great gifts include fiery originality, disarming candor and sensitivity to a great range of experience, including the struggles of her parents' generation of African-Americans and the paradoxes of her own. A 1996 MacArthur "genius" grant recognized these talents, and (1998) confirmed them. In this, Moss's first book-length narrative poem, Varl, a girl of 14 who is the slave of the title, lives in antebellum Tennessee, on the estate of slave owner Peter Perry, who is a collector of moths as well as people. Varl can read and write, but Perry's angry white wife, Ralls Janet, cannot. To avoid her wrath (and his), Varl writes down her experience on cloth panels, which she wears under her garments (like a cocoon). Also on or near Perry's place are Varl's omnicompetent mother, Mamalee; the love of Varl's life, the slave Dob ("the king of strength"); Peter and Ralls Janet's daughter, Lusa, who demands to know what it's like to be black; and white neighbors, who disapprove violently of Perry's "scientific" experiments with moths. Perry, Varl explains, "can't admit the deviancy/ of his love for me"—leading to his torture of moths; of herself, by contrast, she explains, "Inside my cocoon I am already Free." Varl's voice is charming (very much like Moss's own) and her images do splendid work (as when Perry's grandmother dies with her mouth full of bees). Yet neither Moss nor Varl can stitch her episodes into a unified historical narrative, and Moss's extremely individual voice does not quite suit her historical impersonations. Meditative digressions and the characters' somewhat tangled backstory detract from the overall arc, but fans will find lines like "Outline of a confusion/ of flattened roses on her face," and take off from there.

Buffalo Dance: The Journey of York