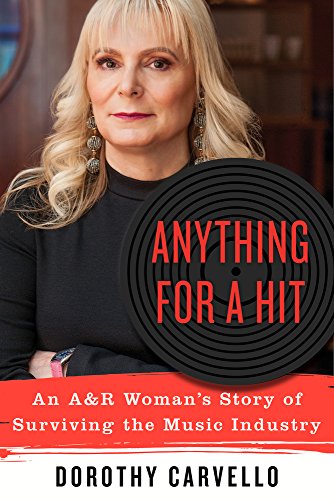 Anything for a Hit: An A&R Woman’s Story of Surviving the Music Industry

In this hard-hitting, profanity-laced tell-all recounting 19 years at some of the biggest recording companies, Carvello takes readers inside the pre-digital music industry of the 1980s and '90s. At age 24, Carvello became secretary to Ahmet Ertegun, the founder of Atlantic Records, and describes his tirades that fostered a company culture of “toxic masculinity.” Though Carvello rose to become Atlantic’s first female A&R executive, she never broke through the glass ceiling (“In a man’s world I had to work twice as hard for half as much”), and the book reads as a means of settling scores. When Carvello was a teenager, a teacher told her that “Men are going to try to break you”; here she reveals the truth in that statement as she describes the music industry as “a circus mixed with an orgy” run by men who thought nothing of steeling royalty payments and engaging in payola with radio stations. Tales of parties (Skid Row, on tour in Ft. Lauderdale, are described as “animals, running and jumping over everything”) occasionally lighten the litany of dark stories in which Carvello helps male colleagues succeed in their careers only to receive no credit and, soon after, be fired. Carvello is piercingly honest in this discouraging look inside the music industry. (Sept.)

Correction: An earlier version of this review misstated the years covered in the book.