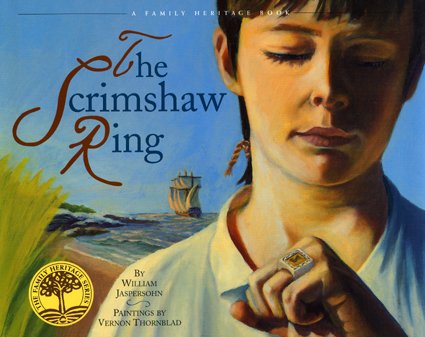 Jaspersohn () graphically recounts a boy's harrowing encounter with a band of mutinous pirates in this suspenseful true tale from the early 18th century, part of the Family Heritage series. Young William Bateman likes to pretend he's battling pirates on his family's coastal Rhode Island farmland. But when a mutinous crew comes ashore to slay their captain and plunder William's farm while his parents are away on errands, he gets an all-too-authentic dose of the real thing. Detailed paragraphs describe a pirate's harsh nature and physical appearance (e.g., their "thick yellow toenails" and heads shaved "to rid their scalps of lice and fleas"). Thornblad's equally graphic, realistic oil paintings combine well with the text to create a dire tone in the climactic scenes, including the captain's murder (viewed from a distance) and William's confrontation with the menacing pirate who breaks into the farmhouse ("He was dark and small, with bright, weaselly eyes, and gave off a stink of bilgewater and sweat"). Discovering only a child, the mutineer offers a ring carved from whalebone as a goodwill gesture. Thornblad, in his illustrative debut, just as easily portrays William's idyllic existence before the pirates came, with inviting green and blue vistas of the boy's shoreside home. At times, the narrative breaks from the boy's point of view ("William had no way of knowing it, but these men were mutineers," etc.), but this historical recounting aptly contrasts real life pirates with childhood's innocent imaginings. Ages 6-10.