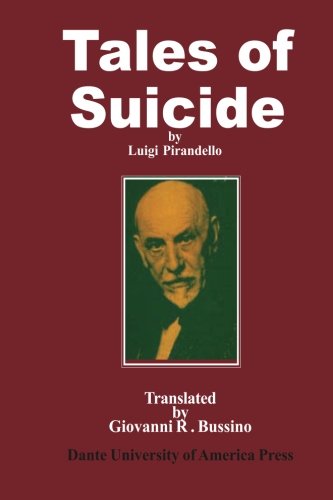 Tales of Suicide: A Selection from Luigi Pirandello's Short Stories for a Year

This volume gathers 20 stories by the late Nobel laureate, written between 1896 and 1935 and, for the most part, appearing here for the first time in English. As the title declares, all tell of suicide, and permeating the collection, from the earlier, tightly plotted and realistic works, to the later, more experimental and stylized stories, is Pirandello's trademark existentialism: the view that life is a game of chance played with dice that are loaded toward tragedy. Most powerful and moving are the stories from Pirandello's middle years, such as ""The Trip'' (1910), in which he delves deeply into his characters, successfully conveying the passions and fears assaulting the sickly, sheltered Adriana Braggi as she leaves her Sicilian village. Others from this period stand out as well, including ``By Himself'' (1913), in which Matteo Sinagra creates his own funeral procession, and ``While the Heart Suffered'' (1914), written in a stream-of-consciousness style. Overall, however, the book is uneven in quality. Many stories written before 1913 are not wholly forceful nor probing, and the final two from 1934 and '35 are vague and unsatisfying. An awkward translation compounds the tales' weaknesses. Moreover, it is questionable whether publishing 20 stories about suicide in one volumea decision apparently made by contemporary editors, not Pirandellois even desirable. The repetition and lack of suspense, especially in the less graceful works, is burdensome. (May)
close
Details