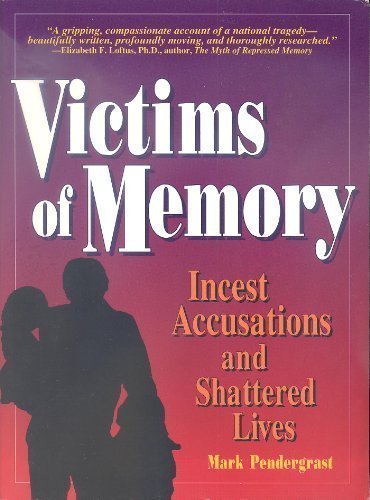 Pendergrast, an investigative journalist and author of the well-received For God, Country and Coca-Cola, here abandons any pretext of objectivity in an emotionally charged diatribe against the recovered memory movement. Accused of sexual abuse by one of his daughters on the basis of recovered memories, he describes his personal anguish and inability to find out any specifics of the allegations. Prime targets of his wrath are manipulative therapists who ``facilitate'' recovery of childhood memories of abuse, which they claim to be the cause for whatever mental illness their patients (usually, but not always, female) may suffer. Using hypnosis, psychotherapy, age regression, dream work, automatic writing, sodium Amytal, they guide troubled patients into remembering lurid scenes of sexual abuse (graphically described by Pendergrast), satanic rites and demonic possession. The unfortunate ``incest survivors'' usually cut off all contact with their families, becoming dependent on therapists for years. Pendergrast devotes four chapters to interviews he conducted, but without scientific control or scholarly basis, the narratives of therapists, survivors, the accused and retractors (those who have taken back their allegations) lack weight. Also detracting from his thesis are the repetitious accusations and titillating accounts of sexual abuse, which, after several hundred pages, seem obsessive and needlessly sensational. Pendergrast is a skilled journalist, but his book would have benefited greatly from substantive editing and a more scholarly approach to this controversial subject. (Feb.)
close
Details