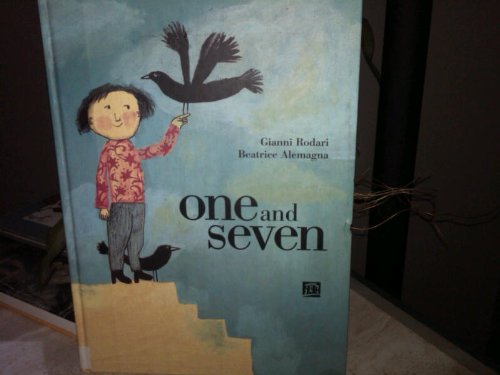 This hopeful but short-sighted allegory, a translation of a short story by Italian writer Rodari, opens with an enigmatic statement: "I knew one child who was children." Seven crudely drawn boys, each with a different skin color and shirt-and-pants attire, line up on the page. According to the next image, which pictures a child waving to a tram, "He lived in Rome, his name was Paolo, and his father was a street-car driver." The following page clarifies, "But he also lived in Paris, his name was Jean, and his father worked in an automobile factory." Every turn of the page expands the "one and seven" concept, so that the universal child ("who was eight years old") lives simultaneously in Berlin, Moscow, New York, Shanghai and Buenos Aires. One spread by Alemagna, whose art recalls G. Brian Karas's naïve style and pasty layers of paint and collage, pictures the profiles of two boys who face each other in extreme close-up. Russian "Yuri had white skin, [Chinese] Chu had yellow skin,... yet they were the same child and they laughed in the same language./ Now all seven have grown up, and will no longer be able to make war against one another/ because all seven of them are one man." This may be an optimistic sentiment, but it is hardly all-inclusive. Readers may wonder why other major global areas go unrepresented, and girls will notice that the composite child is male and is compared to his working father, leaving out a female perspective. Rodari offers a disappointingly restricted dream for a common humanity in this paper-over-board, oversize volume. Ages 5-up.