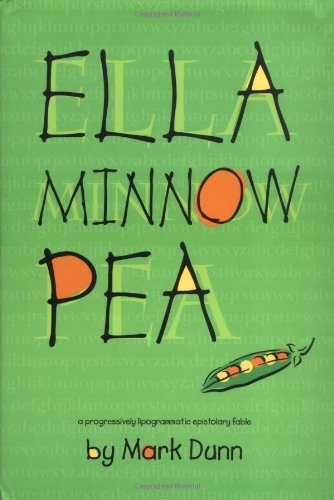 Playwright Dunn tries his hand at fiction in this "progressively lipogrammatic epistolary fable," and the result is a novel bursting with creativity, neological mischief and clever manipulation of the English language. The story takes place in the present day on the fictional island of Nollop off the coast of South Carolina, where over a century earlier, the great Nevin Nollop invented a 35-letter panagram (a phrase, sentence or verse containing every letter in the alphabet). As the creator of "the quick brown fox jumps over the lazy dog," Nollop was deified for his achievement. The island's inhabitants live an anachronistic existence, with letter-writing remaining the principal form of communication. Life seems almost utopian in its simplicity until letters of the alphabet start falling from the inscription on the statue erected in Nollop's honor, and the island's governing council decrees that as each letter falls, it must be extirpated from both spoken and written language. Forced to choose from a gradually shrinking pool of words, the novel's protagonists—a family of islanders—seek ways to communicate without employing the forbidden letters. A band of intrepid islanders forms an underground resistance movement; their goal is to create a shorter panagram than Nollop's original, thereby rescinding the council's draconian diktat. The entire novel consists of their letters to each other, and the messages grow progressively quirkier and more inventive as alternative spellings ("yesters" for "yesterday") and word clusters ("yellow sphere" for "sun") come to dominate the language. Dunn obviously relishes the challenge of telling a story with a contracting alphabet. Though frequently choppy and bizarre, the content of the letters can easily be deciphered, a neat trick that elicits smiles. Wordsmiths of every stripe will appreciate this whimsical fable, in which Dunn brilliantly demonstrates his ability to delight and captivate.