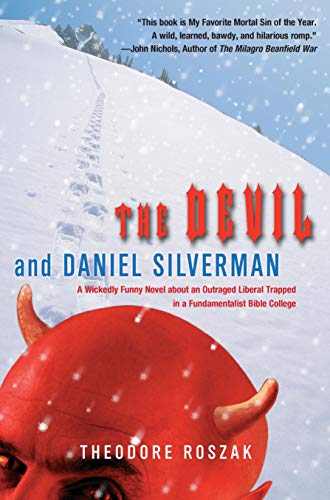 THE DEVIL AND DANIEL SILVERMAN

This story of a gay Jewish novelist's trip from San Francisco to a small religious college in the Midwest is an uneven, fitfully entertaining satire. Roszak, a social historian () and novelist (), begins with some witty jabs at the publishing industry. Daniel Silverman is a writer whose last success was nearly 20 years ago, when ("solid middle-brow exercises in mordant but good-humored social satire") spent one week at number 10 on the bestseller list. Now his job teaching university extension courses isn't paying the bills, and his agent has long since dumped him. When Minnesota's Faith College invites him to speak on humanism, he can hardly refuse—they're offering $12,000. When he arrives, he finds that the faculty members believe, among other things, that homosexuals are unclean and humanists are going to hell. To make matters worse, he is trapped by a ferocious blizzard for several days. At this point, the book becomes bogged down in broad, predictable sendups of the American religious right. Silverman has heated arguments with his bigoted hosts, who talk about "the nearly monopolistic influence your people hold over the mass media" and insist that evidence for the Holocaust is "exaggerated." Roszak does some damage control by turning to farce, as a liquor-soaked Silverman begins to suspect that his hosts are planning to kill him before the end of the storm. But the novel's intermittent pleasures are weighed down by the clumsy social critique.