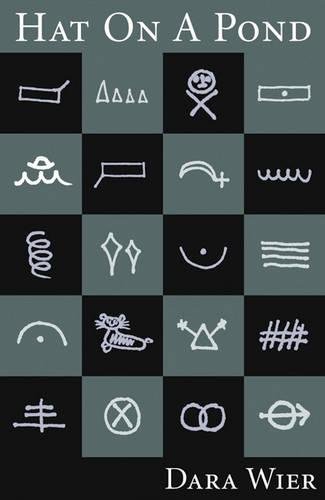 HAT ON A POND

Wier's exuberant poems often organize themselves as catalogues or lists—of actions, of things, of sights, of related adverbial phrases—so that any one poem in this thick, eclectic eighth book of verse (Wier's third in four years) can include almost anything. "Awe of Everything" fits in a dialogue with a "differential grasshopper," a "diesel grinder," a "stealth bomber," "finely embroidered silk labels" and a "green/ Vacillating amplifier"—and that's only in the first nine lines. "Wagonload of Freshly Sprung Potatoes" enjoys the bleakly, politically comic potential of burnooses among "destabilizing hills"; "A Ghost's List of Alarming Notes After a Drizzling Rain" runs from rats in an alley to outer space and back. Often, however, Wier's verbal exuberance has trouble deciding when (if ever) to stop: her jaunty collages run from skewed, enticing anecdote to odd phrase, to the "muffled whoa" of a "feral boy." Self-descriptively chaotic poems like "More Than We Knew What to Do With" and "Hot Pursuit of the Unapproachable" seem almost improvised, as if written on an extended dare. In the verse of James Tate, Susan Wheeler or (especially) recent John Ashbery, apparently similar volleys of non sequiturs can remain formally varied, engaging and wise. Wier's collocations of oddities, however, are too similar to one another, and lack sound-based, ideological or structural substitutes for the prose sense they avoid.