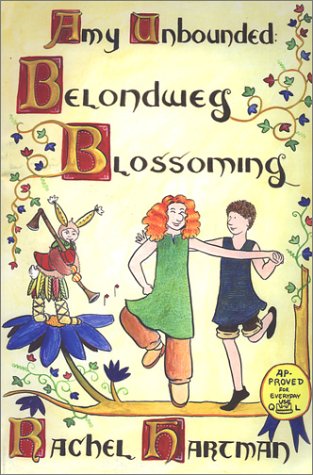 Hartman self-publishes her mini-comic on a copy machine, but the deliciously imaginative series about a medieval nine-year-old girl and her friends and family has built up a devoted following. Last year, Hartman won a Xeric Foundation Grant to publish this collection of stories as her first book. It's a gently paced ensemble comedy of manners, in which Amy observes business intrigue, culture clashes, class machinations among grown-ups (which she doesn't entirely understand), has her first crush and begins reading , her fictional country's national epic. Hartman has a historian's eye for the realities of preindustrial life (her characters spend a lot of their time preparing food), and a storyteller's gift for making them fresh and funny. She makes even the standard elements of fantasies set in the Middle Ages seem hilariously normal. In Amy's world, the knight in exile is an uncle who stops by for dinner once a week and the dragon disguised in human form is a grad student researching local customs. Hartman draws the characters in a bold, cartoon style (dots for eyes, bulbous noses), but illustrates her kitchens, churches and peasant outfits with real care. While the story is set in medieval times, Amy and her playmates think and act like contemporary kids. Hartman's stories are driven by her elegant writing. Even minor characters are memorable and vivid, and the story proceeds with the casual verve of Laura Ingalls Wilder's Little House books.