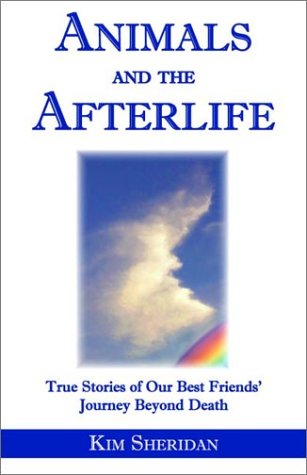 ANIMALS AND THE AFTERLIFE: True Stories of Our Best Friends' Journey Beyond Death

This distinctly New Age clone of a "Chicken Soup" book will be affecting for many readers, but for those who accept the author's full-blown agenda of animals having souls and communicating to us from the afterlife through mediums (here called "animal communicators") it will be a major survey. It also helps to accept most of the remaining strains of New Age thinking and the author's commitment to animal liberation, including vegetarianism. The same caveat applies to the numerous anecdotes Sheridan has collected about departed companion animals, as well to Sheridan's own experiences with companion animals, most of whom have been rats. (Their short lives have given Sheridan a great many occasions to grieve for animals; she is pictured with one, "little Kristin Sheridan," on the back cover.) Sheridan writes with overwhelmingly sincere conviction and a passionate loathing of those who deny that animals have souls or who admonish those who have lost pets that "it was just an animal, get over it." The only really negative reactions to this book are likely to be from those who want to drive the spiritual element out of people's relations with animals, companions or otherwise. Most others will see where Sheridan is coming from, even if they are not going with her.

: In the Dec. 8 review of Margaret Morganroth Gullette's latest book, the title was misstated. It is