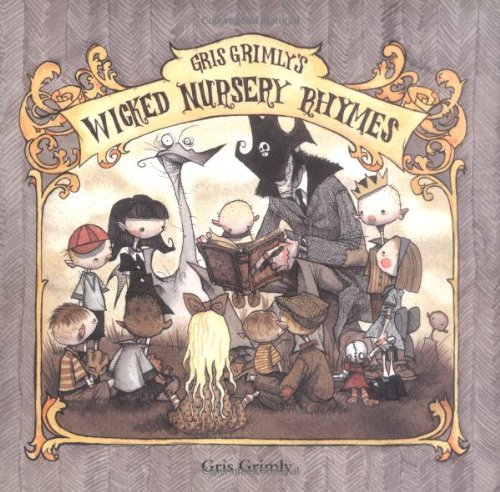 Grimly ( ) styles himself as a goth cousin to Mother Goose and Santa Claus. His introduction, "Father Grim," pictures a sinister Jack the Ripper in a herringbone overcoat and pointy shoes, toting candy canes and a teddy bear with a missing eye: "Gris Grimly travels near and far to find where naughty children are./ He searches for them in the night, instructing them with tales of fright." Grimly doesn't match the meter of the original rhymes. Instead, he gives their plots a morbid twist. When Jack and Jill, for example, go to fetch a pail of water: "Jill pushed Jack unto his death/ when he had paused to catch his breath./ She felt remorse for the first time/ and threw herself not far behind." Little Bo Peep stands on a hill littered with animal skulls: " 'I think I have too many sheep,'/ said a girl named Little Bo Peep./ .../ She thought about what should be done,/ and then went on to eat each one." Showing the characters as malicious punks with heavy eyelids and hunchback postures, Grimly's spidery ink drawings to some degree recall Dave McKean's macabre work in and the delicate, mortuary-chic style of Tim Burton. Yet Grimly ends up being nasty for nastiness's sake alone. His playground efforts mock the wholesome formula, but they lack the smart, self-consciously parodic wit of the Series of Unfortunate Events or Edward Gorey's . Ages 13-up.