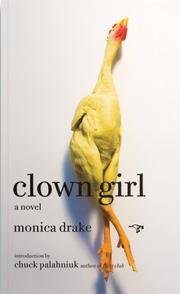 As Drake's debut opens, Nita, otherwise known as Sniffles the Clown, is tying balloon animals for a horde of greedy, sticky children at a fair. Suffering what may be a cardiac event, she's rushed to the hospital—after trying to get help from a clown fetishist, who simply drops his phone number on top of her prone form. Welcome to wacky, stressful Baloneytown, where clown prostitution, stoned dogs and fire juggling–cum–arson are the norm. Nita struggles to make enough money clowning to keep herself in oversized shoes and squirting daisies, while also saving for Clown College tuition for her boyfriend, handsome clown Rex Galore. But Rex is mostly MIA, and Nita's longing for him settles on local cop Jerrod. While not much happens, the pace of the narrative is methamphetamine-frantic, as Drake drills down past the face paint and into Nita's core, often using Nita's relations with men as the bit. Nita emerges as a fully-realized character, bearing witness to a lot of the emotionally ridiculous and just a hint of the sublime. Some plot threads never quite come together, and a few characters are underdeveloped, but there is a lot more going on here than just clowning around.