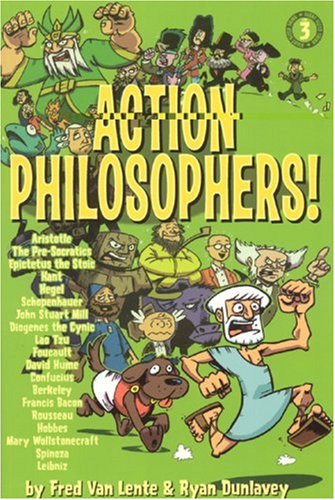 In this third and final trade paperback collection, Van Lente and Dunlavey return once more to their comics précis of philosophy with a survey of Greek philosophers, a –style trial of God with Kant as his “epistemological attorney,” and a hilariously spot-on parody of Peanuts (“You're a Good Man, John Stuart Mill”), before closing with a “lightning round” that runs a gauntlet of 11 philosophers, ranging from Lao-Tzu to David Hume, in 32 pages. As with most of the series, it negotiates the turbid waters of philosophical theory not only with ease but laugh-out-loud irreverence. This is no dumbed down My First Philosophy book for grade schoolers; although it gilds the theories of philosophers like Epictetus the Stoic with word balloons and cartoon slapstick, it never shies away from complex ideas, even if that means occasional lapses into philosophical jargon (“in a synthetical cognition, you augment an intuition with a conception”). Van Lente and Dunlavey engage some of philosophy's most recondite notions with wit, clarity and brilliant accessibility, but intelligence is always presumed and demanded. Only the most precocious of children need apply.