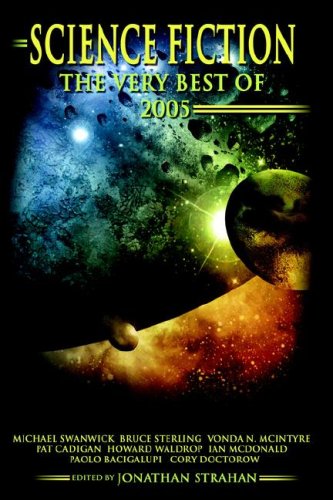 Science Fiction: The Very Best of 2005

Given the existence of two long-running "best of the year" SF anthologies edited by Gardner Dozois and David Hartwell, one might wonder at the need for yet another such volume. Still, veteran Strahan ( ) shows excellent taste in his 14 selections, starting with Michael Swanwick's charming "Triceratops Summer," in which a glitch at a research facility temporarily transports dinosaurs to the modern world. Other high points include James Morrow's "The Second Coming of Charles Darwin," in which evangelicals send an AI disguised as a tortoise back in time to destroy all evidence of evolution on the Galápagos Islands; Bruce Sterling's "The Blemmye's Stratagem," which concerns an alien living on Earth at the time of the Crusades; Susan Palwick's "The Fate of Mice," in which an intelligent lab mouse must decide where his loyalties lie; and last but not least, Ian McDonald's powerful "The Little Goddess," in which a girl in a far-future Nepal becomes the latest incarnation of a deity.