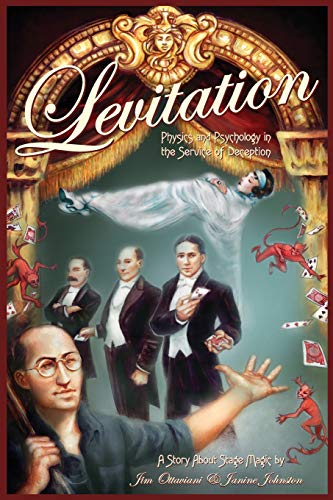 Levitation: Physics and Psychology in the Service of Deception

This nonfiction graphic novel gives the history of three early 20th-century magicians and the invention of the standard levitation trick. It's claimed that “Entranced Fakir,” or “The Levitation of the Princess of Karnak” came from India, but in reality it was stolen from European magician John Neville Maskelyne by American Harry Kellar, who took it back to the States. Years later, it was passed on to Howard Thurston, who had “the voice and bearing of a preacher with the manner of a carnival barker.” (Kellar notes that the two professions are “not so different.”) The art is lively with nice Georgian and Jazz Age touches, especially in face shots that resemble old, hypnotic-eyed daguerreotypes of mesmerists in frock coats. It's all good fun, but the story never finds its heart, only touching on the obsessive control the great traveling magicians must have had, and their life on the road. The hard economics they faced comes through splendidly, however. To perform, they had to look like gentlemen. To survive, they had to act like cutthroat rogues. The story contains two revelations: one is the diagram explaining the trick. The other is the revelation that even when audience members are quietly shown how it works, they don't tell.