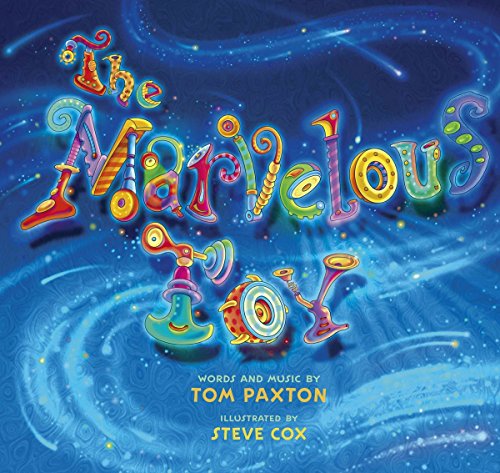 The lyrics to Paxton's folksong will be familiar to sing-along fans: “It went zip! when it moved/ And bop! when it stopped/ And whirr! when it stood still./ I never knew just what it was,/ And I guess I never will.” In this picture book adaptation, the boy receives the toy from his father, they enjoy it together, and the boy later passes it on to his own son with similar enthusiasm. Cox's ( ) supercharged spreads propel the song into the 21st century. Although the spindly, alien-looking toy is never completely visible, the rainbow-colored protrusions that are shown emit airbrushed beams, while sparks zoom and zip behind it, illuminating the night and leaving a trail of magic in its wake. In contrast to the toy's dramatics, father and son appear quite ordinary; the boy wears a red T-shirt and jeans, the father a shirt and necktie, clearly back from a nine-to-five job. The story's modern setting and the artwork's airbrushed quality may well attract children who wouldn't otherwise hear Paxton's music (four Paxton songs are enclosed on a CD). Ages 3–8.