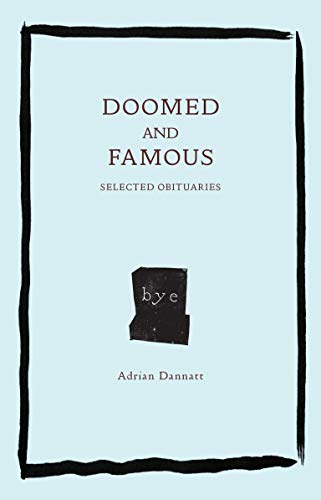 In this fascinating compilation, journalist Dannatt (Francois-Xavier and Les Lalanne: In the Domain of Dreams) assembles a collection of obituaries of artists, vagrants, and luminaries who lived particularly captivating lives. He writes in the preface that he’s drawn to “the truly marginal, utterly obscure, mad, bad, and definitely worrying” and to those who have “failed or succeeded in a way that made such terms intriguing again.” These include German artist Martin Kippenberger (1953–1997), who died “after a long, terminal battle with disco dancing, indiscriminate fornication, and, above all, drinking”; Rockets Redglare (1949–2001), a prolific New York character actor who delivered drugs to Sid Vicious and Nancy Spungen at the Chelsea Hotel the night Spungen died; and Isabelle Collin Dufresne (1935–2014), aka Ultra Violet, who appeared in several Warhol films, had an affair with Salvador Dalí, and “drank his urine to improve her genius level.” The book concludes with the author’s own (preliminary) obituary, in which he recounts being a child star in the U.K. before going to seminary and eventually becoming an obituarist. The best moments lie in Dannatt’s musings on death itself, as, in death, “everything comes together as one giant, cosmic anecdote.” Dannatt’s collection is easy to dip into and difficult to put down. (Feb.)
close
Details