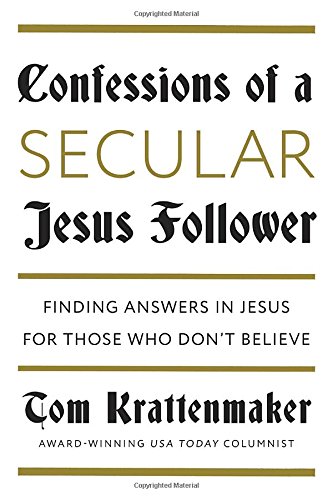 Confessions of a Secular Jesus Follower: Finding Answers in Jesus for Those Who Don’t Believe

Krattenmaker (Onward Christian Athletes) was raised Catholic; he later stopped believing in the supernatural aspects of Christianity but still admired Jesus greatly as a role model. Asking what rock we should tether ourselves to in life, Krattenmaker makes a strong case for Jesus, not as a resurrected messiah or god, but as an ethical teacher and guide. Humanists and atheists have much to learn from this sage, Krattenmaker argues, and he spends his book outlining the basics of Jesus’s ethics. Most of this, with its emphasis on the loaves and the fishes (abundance), the Sermon on the Mount (radical nonviolence), and the good Samaritan (caring for others), will be familiar to anyone with an interest in or some exposure to Christianity, but for someone new to these stories or with a skeptical outlook, Krattenmaker’s book fills a gap. Krattenmaker is strongest when he marshals facts and figures to explain problems, such as overcrowding within the U.S. prison system, weakest when he talks about himself, but overall he offers a reasoned guide that makes a 2,000-year-old story relevant to secularists today. Agent: Wes Yoder, Ambassador Agency Inc. (Oct.)

This review has been corrected. It previously listed the incorrect agent for the author.